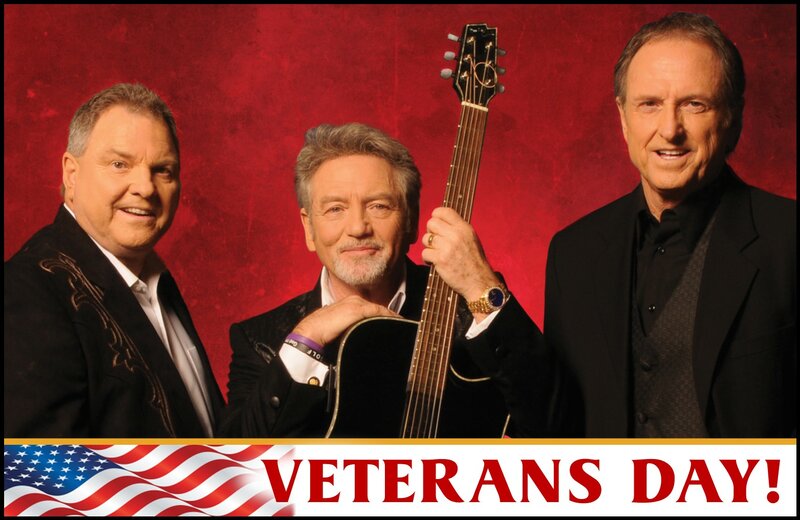 This world-famous group of siblings, Larry, Steve and Rudy Gatlin, are returning to The Barnhill Center (TBC) for the third time. They are still one of the most requested acts from our patrons.
“The Gatlin Brothers were raised by a Marine and their patriotism is on display at all times,” said Sharon Brass, TBC producer. “Their concerts always include a few patriotic songs in addition to their big hits. So they were top-of-mind when we booked this show on Veterans Day.”
“But they don’t just sing the songs – they also support our miliary. They have proudly performed for U.S. Troops in Kuwait, Qatar, UAE, Germany and military bases across the U.S.”
Originally from West Texas, The Gatlins began performing together as children in church and several local television shows. Then Larry, who was the eldest, headed off to the University of Houston on a football scholarship. His degree in English became a huge benefit to his already-prolific song writing.
After Steve and Rudy;s college years, the three brothers reunited in Nashville and recorded their debut album, “The Pilgrim.” At this point, some of Larry’s original songs were being recorded by other Nashville stars.
It was their third album, in early 1976, that put The Gatlin Brothers at the top of the charts with its single, “Broken Lady.” This song won them a Grammy for Best Country Song.
That was the same year the Gatlins were inducted into the Grand Ole Opry.
Throughout the ’80s, the Gatlin Brothers released 15 Top 40 hits, including “Houston (Means I’m One Day Closer to You),” “Denver,” “The Lady Takes the Cowboy Everytime,” and “She Used to Be Somebody’s Baby.”
In 1991, the group decided to retire. The following year. Larry appeared in the lead role of the Broadway musical “The Will Rogers Follies,” while Steve recorded an inspirational album and Rudy opened two Gatlin Brothers Music City Grilles.
In 1993, the group opened their own theater in Branson, Missouri, where they began performing regularly; they also sang frequently in Las Vegas.
In the early 2000’s the brothers went back on the road for selective dates and enjoyed touring again. In 2008, they recorded their first album in nearly two decades, “Pilgrimage.”
In 2015 the brothers celebrated 60 years of making music together and released a new album, “The Gospel According to Gatlin.”
Throughout their career they have accumulated seven #1 Singles, 32 Top 40 Records, 22 studio albums and five BMI “Million-Air” Awards.
Their accolades include three ACM awards for Single of the Year, Album of the Year and Male Vocalist of the Year for Larry. The group also received five nominations for CMA Vocal Group of the Year, Single Of The Year, Album Of The Year and Male Vocalist of the Year.
The Gatlin Brothers have entertained on some of the world’s most iconic stages including the Grammy Awards, the American Music Awards, the People’s Choice Awards, the Tonight Show with Johnny Carson, Oprah, Hee Haw, Love Boat, the Midnight Special with Wolfman Jack, the Merv Griffin Show, Solid Gold, the Barbara Mandrell Show and their own variety special on ABC – “Larry Gatlin and the Gatlin Brothers”.
They have performed at the White House, the President Reagan Library, Air Force One, Ford’s Theater, Camp David, President Bush’s 80th Birthday Party, The Lincoln Theater, Carnegie Hall, Madison Square Garden, West Point, Dollywood, The Mall in Washington D.C. for July 4th, the Greek Theater, Billy Bob’s, Radio City Music Hall, Disney World and Wembley Music Festival.
With the most self-penned Top 40 Billboard hits, Larry is known as one of the top songwriters of all time. Songs from his massive catalog have been recorded by Elvis Presley, Barbara Streisand, Johnny Cash, Roy Orbison, Glen Campbell, Kris Kristofferson, Sir Tom Jones, Dottie West, Charlie Rich, Johnny Mathis and dozens of others.