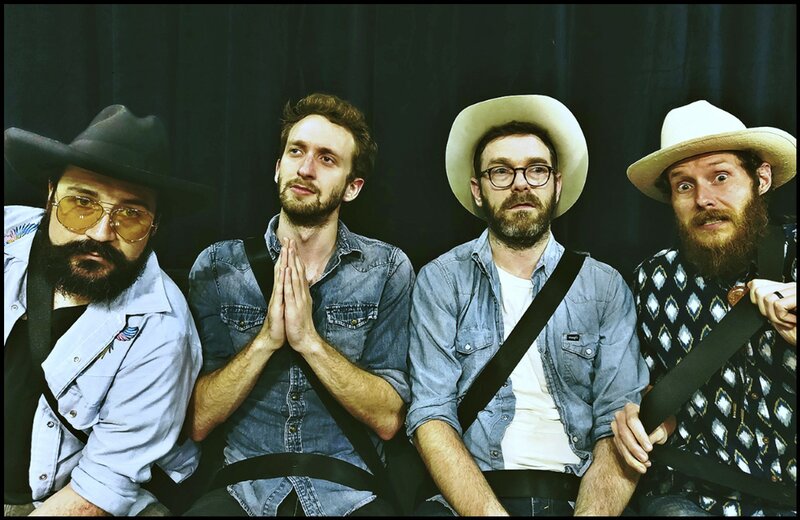 Jomo and the Possum Posse entertain with a mix of Country/Roots, Honky Tonk and Rock ‘n Roll – all with a humorous Americana flavor.

These Austin-based musicians/comedians are known for their unique brand of original musical storytelling. Each song tells a story, and most are funny stories.

“You are in for a good time!” said Sharon Brass, The Barnhill Center producer. “These guys could easily be direct descendants of Ray Stevens or Roger Miller, with a touch of Lyle Lovett built in.

“Their lyrics and onstage antics are hilarious, and their musical talent is spot-on. The only trouble is that some of their songs get stuck in your head.”

The band is led by Jomo Edwards from West Texas, and his award-wining lyrics tend to skate the line between the cynical and the arcane.

Some of their song titles give you the picture: “Battered Husband Blues,” “Annie Is A Chicken Now,” “High Grounds Coffee Shop,” and “The Real Housewives of the West of Us,” are just a few.

The four-piece ensemble includes upright base, fiddle, guitars and sometimes drums or even a washboard.

They have released three studio albums, the most recent was in 2019 and entitled, “Take a Number, Satan.” The album has received excellent reviews.

In 2020, the band was selected “Best of Fest” for the third year in a row at Austin’s annual FronteraFest.

In 2021, Jomo took home the 1st Place award in the annual MerleFest Chris Austin Songwriting Contest in the “General” category.

However, the band is best known for their wildly popular viral video series, “Guy On A Buffalo,” seen on YouTube. The project was started simply to generate interest in their music and to finance a record. It quickly became a must-see series of videos with over 3 million viewers.